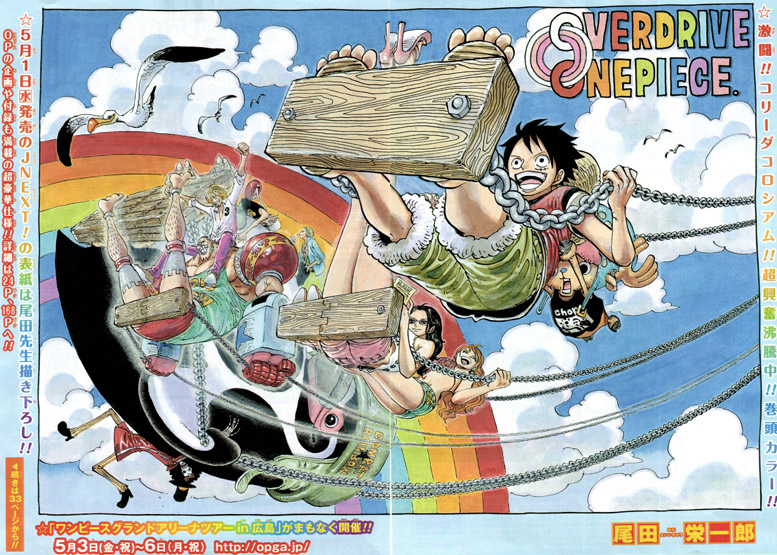 Credit: Aohige
Source: APF
Stato:Confermato
[SPOILER]B block starts, 138 men battle royal.
Although what Dagama is doing isn’t fair, it’s not against the rules to team up.

Apparnetly King Elizabello’s punch is so powerful, he’s put a massive hole in the enemy fortress.
But there’s on problem… it takes an entire hour of preparation for the king to throw one punch out.
It’s Prodence’s ultimate weapon, that can only be fired once in a single battlefield.
Dagama thinks the “King Punch” could knock out even a Yonkou if it ever lands on one.
Dagama asks his lord if he’s ready, to which Elizabello says he’s ready to throw it out at any time.

Bellamy asks why Lepanto, who is an army commander of Dressrosa, thinks it’s ok to lend hand to military advisor of another country.
Lepanto answers money is what makes the world go around, he’d rather gain money at his feet rather than chase a dream.
Bellamy laughs, saying hearing that hurts (as he shared the same attitude in the past)

Lepanto swings his massive chained spiked ball and knocks three contestants into the water, while Bellamy counters him with Spring Death-Knock (a Gomu Gomu Pistol like spring punch)
There are “Little Battle-fish” swimming in the waters, attacking the fallen contestants.

Abdulla and Jeet are fighting a legion of fodder gladiators, Abdulla howels to grab their attention, while Jeet slices them from behind.
Meanwhile, The fishman Karate master and also user of Fishman Jujitsu, Hack, uses 4000 kawara seiken to punch out a large contestant who mocked the fishman.
Hack is friend of Jinbe, and feels just like Jinbe is a hope for men and fishmen understanding each other, he hopes to find a way of friendship through exchange of fists.
A true Karate-ka!

Blue Gilly is a martial artist who hails from the long-leg tribe. His style of martial artis is Jao-kun Do.
(Obviously a Bruce Lee reference)
He uses his legs like whip, and knocks many fodders out of his way.

One mysterious gladiator stands out… the helmeted “Former” Gladiator Ricky.
No one recognizes him, he’s a newcomer to the arena. Yet, with only a single sword at his disposal, he knocks out multiple combatants.
And old spectator tells a nearby toy man, that he vaguely remembers someone who fights like that, but for the life of him cannot remember his name.

(GEE I WONDER WHO THAT IS, ODA. GEE. THANKS FOR LIKE, MAKING IT OBVIOUS OR ANYTHING. I guess we’ll know the mystery of the statue sooner than we thought lol)

Bartolomeo is lying there on the edge just chilling. He just watches the whole place in chaos, instead of jumping in to fight.

Cavendish says Barto is another one of those annoying rookies.
He’s called the Cannibal because he acts like a douche. (mocking people in Japanese is expressed as “eating people”)
Cavendish is looking through a book containing wanted posters of the “worst generation”.
Luffy asks him why not forgive them already, but Caven is adamant he’ll kill them.
He figured with a big tournament like this, at least one of them will be here…
But just like Burgess did, you can hide your identity in this tournament. He figures he’ll just wait till one of them wins through..
Luffy is sweating bullets hearing this, hahahaha.

Chinjao tells him Garp nearly killed him long ago, and decided to hate him till their grandchildren’s time.
Luffy: HUH!?

– Color Spread: Mugiwara crew are swinging in the sky, with a big rainbow at the background and seagulls fliying in the sky.
– Speaker talks about King Elizabelio II and Dagama, they are fighting.
– We could see a little picture with Elizabelio II, Dagama and their army fighting, like a flashback.
– Elizabelio II punch called “King Punch” compete with Yonkou´s.
– Bellamy Vs Tank Lepanto. Lepanto attacks Bellamy with a big iron ball with spikes.
– Bellamy avoids the attack with Bane Bane no Mi powers and counter-attack with “Spring Death Knock” (it´s like Luffy´s Gomu Gomu no Pistoru with Bellamy´s power).
– Lepanto´s attack hits another fighters, they fall in the water.
– Some little fighting fishes, called “Little Tougyo”, attacks them. “Little Tougyo” have bull horns (now I know why Oda used Corrida Colosseum name lol).
– Abdullah and Jeet fight together. Abdullah distracts other fighters and Jeet attacks them from behind.
– Hack fights with a big guy with a big spiked mace. That gut attacks Hack but he stops the mace with one hand.
– Hack uses “Yon Sen Mai Gawara Sei Ken”, his Gyojin Karate level is 100 (remember Kuroobi´s level was 40).
– Now we see Blue Gilly, he´s Longleg Tribe member (I think he´s Bruce Lee tribute).
– Blue Gilly uses Jao Kune Do style (or something like that lol) it´s like Kickboxing. He defeats some guys Dagama sent to fight.
– Ricky fights against other gladiators and defeats them easily.
– Seems Ricky covers his face becouse he´s a very important person.
– Bartolomeo is stretched out on the ground seeing fights lol
– Luffy and Cadenvish talk in the stands. Cadenvish shows Luffy his own wanted poster, Luffy looks the other way lol
– Don Chinjao appears and discovers Luffy´s true identity, Cavendish’s suprise.
– Don Chinjao asks Luffy if Garp is doing fine. Garp nearly killed Don Chinjao long ago when he was a pirate.
– The old feud will be resolved in his grandson’s generation. [/SPOILER]

This website uses cookies to improve your experience while you navigate through the website. Out of these, the cookies that are categorized as necessary are stored on your browser as they are essential for the working of basic functionalities of the website. We also use third-party cookies that help us analyze and understand how you use this website. These cookies will be stored in your browser only with your consent. You also have the option to opt-out of these cookies. But opting out of some of these cookies may affect your browsing experience.
Necessary Sempre abilitato