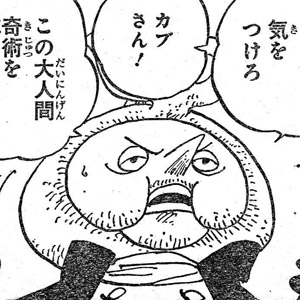 Credit: Aohige
Source: APF
Stato:Confermato
[SPOILER]Chapter 711: Adventure on Island of dwarves
Caribou 29 – Scotch the Iron Boy blows up the house, the and the old lady is sent flying. Caribou is shocked at Scotch’s sudden entrance

Robin is unconscious and is being body searched. One of the dwarves craw out of robin’s clothes, hugging the boobs lol
Robin’s reaction while they’re searching “point A” and “point C” is rather… uhh.
(similar pronunciation to area, where area B is street slang for nipples rofl)

Robin wakes up, stitched to the ground like Gulliver.
One of the dwarven warrior, Leo interrogates her while anther dwarf Kabu warns them of her strange powers.
Usopp and Robin were attacked with gas from anesthetic flower.

She is taken to underground of Green Bit, where the dwarven kingdom of Tontatta.
Leo used his ability of “Nui-nui” (stitch-stitch) to hold her down in place. (They called it a spell, seemingly ignorant of how Devil Fruits work)
He says they can’t allow anyone who’ve seen them leave alive.
Robin swears she was simply curious, and would never tell, then immediately the dwarves are fooled and let her free. lol
They’re fine as long as the human isn’t one of the “bad people”
Rare moment of Robin’s shocked face!
Gancho, the elder of the dwarves greet her.

Dressrosa bay city of Acacia
Zoro is running with the girl dwarf hiding in his jacket.
She’s giving him directions to the flower garden, in a hurry.
All the townsfolk think he’s yelling to himself, advising the children to look the other way (i.e. Zoro is mistaken for a nut lol)

The girl’s name is Wicca, a dwarf scout. She cries how clumsy she is, as Zoro asks her if she’s a toy.
She explains who she is, and asks him to not tell anyone.
She can’t walk she hurt her legs… and pounds into the ground with misery, cracking the ground.
Zoro is amazed at her strength despite her size

She asks Zoro to take her to her leader, she must inform them of whereabouts of the Donquixote family.
She has information that Donquixote family is planning to attack the Straw Hat pirates.
her continued pounding of the floor sends the cracks to the next building, destroying its walls.

Zoro rushes back to the Sunny, to protect the crew left there. He runs off to the opposite direction, she tells him to take her to her leader and from there she’ll guide him back to the ship.

meanwhile in the Colisseum…
C block is about to start. The announcer is talking about the Ka no kuni trio being one of the hopefuls…
Rebecca is looking at a… petal? something left at the window. She sees children and toys playing outside, and smiles.
She spots Franky and the toy soldier running for the “flower garden”, and calls out the soldier. He seems to know Rebecca as well.
He warned her not to enter the coliseum, but she says she’ll win and they’ll live together when she does.
The soldier tells Franky to rush ahead, he asks him if she’s ok… she’s crying. But he says even a tin-man has something he must protect.. even if no tears can come out of these tin-eyes.

Meanwhile at the beach… 2 min till the time for exchange, Law gets a call from Sanji.
He warns him to leave the area immediately! Doflamingo hasn’t quite Shichibukai!
Returning Ceaser won’t do any good, they’ve fallen into their trap! Hurry up and leave!
Fujitora and Dofla are both approaching the beach, as Law tells him it’s too late….! 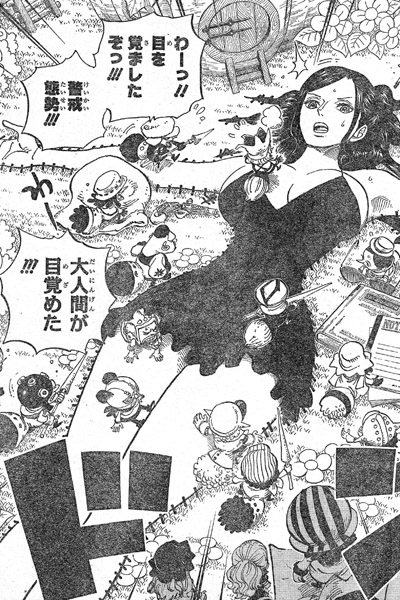 [/SPOILER]
They ask her to give them a weapon, that is their law. If she doesn’t have any, they’re going to strip her of everything. :icon_eek:
Peccato non sia andata così :icon_redface:

This website uses cookies to improve your experience while you navigate through the website. Out of these, the cookies that are categorized as necessary are stored on your browser as they are essential for the working of basic functionalities of the website. We also use third-party cookies that help us analyze and understand how you use this website. These cookies will be stored in your browser only with your consent. You also have the option to opt-out of these cookies. But opting out of some of these cookies may affect your browsing experience.
Necessary Sempre abilitato