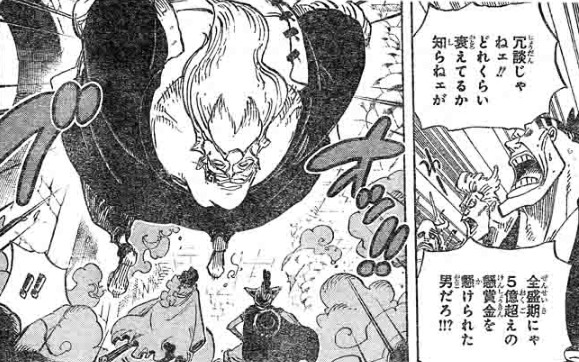 Chinjao tells Luffy Garp was indeed the Devil to pirates back in the days
No matter how many decades pass, the wounds he took will not heal.
Cavendish asks if what he’s saying is true, and Luffy tries to convince him he’s “Lucy”
Chinjao says he’ll have the grandson pay for this feud, to which Luffy tells him to go take it out on gramps, not him.

Cavendish puts a hand on his sword, saying if he really is Luffy, he’ll kill him here and now.
Chinjao says if only he had realized about Dragon earlier, Luffy would never have been born.
He attacks with a headbutt, crushing the floor.

Fighters nearby notices Chinjao wrecking the place, and comments on how in his prime Chinjao was a 500million berry bounty.
Chinjao grows hair as he goes for another attack at Luffy.
Cavendish draws his sword telling Chinjao to back off, Luffy is his target. The sword is Durandal, one of the best swords in the world.
He counter attacks Chinjao’s headbutt with Biken (Beautiful Sword) Blue Bird, a piercing attack, at Chinjao’s head.
Chinjao’s head is so tough, it actually stops the sword attack without letting it penetrate.

Chinjao’s hair is gone again… he attacks with rapid secession of punches, and Caven ponders he won’t win this fight by going easy.
Luffy jump on top of Chinjao, and punches him into the ground. It stops the old man, but doesn’t hurt him at all.
Apparently Chnjao has split an arctic land with his headbutt in the past…!

Chinjao gets up, this time growing massive beard… and looming over the two young combatants like an enraged demon.
He says the two are pretty good, but nowhere near enough training to handle him.
Cavendish acknowledges Lucy must be Luffy, from seeing his strength.
Caven tells Luffy he’s getting hated everywhere he goes, stealing his popularity, being born a grandchild of the devil, etc
Luffy is like “NONE of that is my fault!!!” lol
As Don Chinjao starts to go all out to take out both the younglings, his grand children come to stop him.
They don’t know why their gramps is so mad, but tells him if they get disqualified now, their “true mission” will be hindered.

Luffy runs off and Cavendish goes to search for him. He plans to kill Luffy before the fight starts
Sai and Boo tells their grandfather if he wants to kill him, do so in the arena… they’re in the same block after all.

As Luffy ponders what to do, rumor spreads about the Straw hat in the tournament.

Meanwhile in Block B
Tank Lepanto is taken out by Jeet and Abdulla.
There are only 30 people left in the arena. Degama is waiting a little longer to unleash the King Punch, he is confident it can take out anyone left standing. Blue Gilly is fighting Ricky one on one.
Jeet and Abdulla looks around for their next victim, when Bellamy comes to them and Stab both of their feet with knives and nail them to the ground.
He then grabs both of them by their mouth, and snaps their spine (or neck).
The crowd goes wild at Bellamy’s cruelty.

The crowd cheers Hack for his immense strength, taking out competitors easily with his Fishman Karate.
Bartolomeo is taking a piss int he water, as the crowd watches in horror.
Hack approach him to attack him with 4000 tile fist, as he is dishonoring those who are fighting seriously.
At first Barto acts all worried but as Hack punch him, his fist is stopped by an invisible wall and he breaks his arm.
Barto laughs, as he was just pretending to panic.

Luffy doesn’t recognize what just happened, and wonders what Barto just did.

This website uses cookies to improve your experience while you navigate through the website. Out of these, the cookies that are categorized as necessary are stored on your browser as they are essential for the working of basic functionalities of the website. We also use third-party cookies that help us analyze and understand how you use this website. These cookies will be stored in your browser only with your consent. You also have the option to opt-out of these cookies. But opting out of some of these cookies may affect your browsing experience.
Necessario Sempre abilitato