Going back to 30 min before the time to hand over Ceasar….

Sanji is lying on the ground, bleeding and beat up.
Violet says before her, all men are the same as being naked.
She mocks Sanji, teasing him how a loser like him thought he won her heart.

Sanji says she is lying. She has a pure heart, but and forced to be where she is by deception.
She kicks Sanji in the face, saying he must be looking for a way out of this by lying.
She uses her Giro Giro no Mi to “see through” Sanji. She can even see his bones.
Violet makes a shape of glasses with her fingers and ‘wears’ them on her eyes to see Sanji’s heart to reveal why Law allied up with the Strawhats, and what he’s planning.

She uses “Peeping Mind” ability to look into Sanji’s eyes.

Violet screams, blushing and crying at how Sanji’s thoughts are all about her. She can’t see past them to reveal the plans.
Sanji says those eyes when she asked him there’s a man she wanted killed, it was sincere.
He WILL NOT doubt a woman’s tears, even if a million people wouldn’t trust it.
Violet is shocked at Sanji’s reaction… he tells the truth!

As her lackies try to kill Sanji, she stops them by creating Eye-whales from her eyes, whch stomps and takes out all the men.
(It’s a Japanese pun… “mekujira” is a term meaning “glearing” in Japanese, but it also means “eye” and “whales”)

Sanji was telling the truth, she is an unwilling member of the gang.
She tells him to run away from here, they know every move the Straw hats have been making.
She appreciates Sanji’s gestures, and uses her eye-power to let Sanji “see” what transpired this morning…..

As the Dressrosa citizens gather in front of the palace, begging their king to rethink stepping down, Dofla is irritated at the crowds yelling and wondering when CP0 is getting there.
CP0 arrives and explains to the citizens, the news about Doflamingo abandoning Shichibukai status and the position of the King of Dressrosa is a mistaken news. The truth will be published to the world at 1500 today… but until then, they must keep this a secret.

Sanji is shocked, saying this is way beyond the power of a Shichibukai to pull this off.
Violet hands him the denden mushi and tells him it may not be too late for his fellows, contact them immediately!

Back to present time, Green Bit…
Law is pissed, wondering what he should do.
Fujitora contacts Akainu, asking Saka-san what’s going on… were even the Marines fooled by this false news?
Akainu is not happy about this ordeal, and is on his way to question Gorousei on what’s going on.
Robin summons a clone of herself next to Law, she just overheard the conversation Law had with Sanji.

Law says the exchange is canceled, they need to get out of here, but Robin tells him she and Usopp are underground.
They can’t help him out, so Law better escape right now.
3PM has come, and Doflamingo arrives. Same time Fujitora arrives at the beach.
Dofla teases Law saying oooh you brought an Admiral here eh? Now that I’m no longer a Shichibukai, this is frightening!

Meanwhile, in Colosseum, the battle royal of block D starts.
Cavendish wants to jump in the ring after Luffy, but is held back by the guards.
Luffy is ready for this fight to begin!

Meanwhile, everyone around the world learns about Dofla’s news being false.

back to Green Bit
Law cannot believe Dofla deceived the entire world just to deceived the ten of them.
A pirate, even a Shichibukai cannot possibly have that much control!
Only ones possible of something like this would be the Celestial Dragons…
Then he remembers what Vergo said. “You don’t know Joker’s past. That will be your undoing…”
Law: You cannot be….!!

Dofla: Fuffuffu, the story goes far deeper than you think… Anyways Law, I just wanted to kill you, that’s all!! 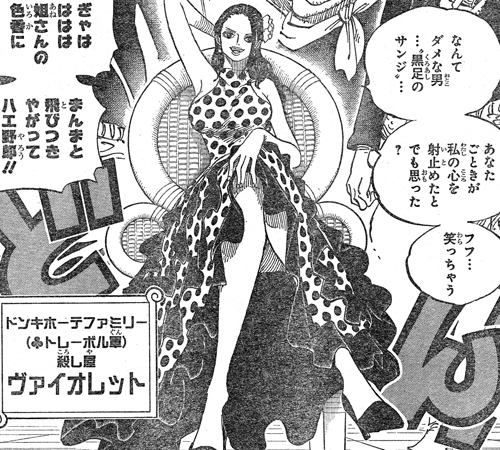