Credit: Kaze1028
Source: APF
Stato:Confermato
[SPOILER]The winner of the block B is…
Bartolomeo

Credit: Aohige
Source: APF
Stato:Confermato
[SPOILER]
Chapter 709: King Punch
The old lady clings onto Caribou’s legs mistaking him for her grandson, begging “Gaburu” not to fight anymore, and to flee from here

Bartolomeo kicks Hack right in the jaw, bringing him down. As the crowd watch in horror, only 24 contestants left.
Blue Gilly kicks Ricky in the helmet, breaks part of it and the armor.
He laughs at Ricky, as Ricky was fighting with a dull blade unable to even cut.

Ricky lays on the ground, as he utters his old age has caught up to him…
He thinks to himself how he hates this cheering of the crowd… and how he hates Doflamingo.

Blue Gilly starts taking out the fodders surrounding King Elizaberro, and Dagama turns on them as well.
Gilly was actually working with Dagama from the start, he was tasked with taking out the allies at the end.

Dagama plans to take out Gilly while he is busy taking out the grunts… but Gilly senses the danger, and kciks Dagama away.
He says he never trusted Dagama in the first place!

Meanwhile, Bartolomeo is destroying Bellamy. Bellamy wonders what kind of ability he is using…!
He keeps taking damage reflected back at himself.

Luffy shouts out to Bellamy, cheering him on!!

As the left over grunts and Blue Gilly approach King Elizabello, he readies his King Punch.
The spectators realize what he’s about to do, and run from the area.
Blue rushes to the king to snap his neck with “Shooting Moon”!

Bellamy has found a way to deal with Bartolomeo… instead of punchig him, he grabs onto him with his spring-powered arm, the grip is so strong, Barto cannot fling him off. As Bellamy gets ready, he senses impending doom coming from behind!
Barto looks ahead and yells “What the hell is that!?”

The blast hits everyone on the ring, knocking out everyone but the King.
Bellamy and Blue Gilly are knocked out in the water as well.
Luffy almost falls from his place lol

But one man still stands in the ring… it’s Bartolomeo!
He put up a square barrier around himself. He’s a Barrier-man who ate the Barrier-Barrier (Bari-bari) fruit.

He punches out his barrier as a wall of attack at King Elizabello, knocking him out in one hit.

The winner is…. Bartolomeo!

Bartolomeo: Hehahahaha! All of you, go to hell!
He then mutters he’ll bring the Mera-Mera fruit to “that person”… assuming, someone he works for!

The toy soldier has been plotting to destroy the factory as well.
He wishes to save those who work there…

But he warns that this can lead to destruction of this entire country.
He tells Franky to follow him if he’s ready to face Doflamingo. He’ll tell him the all of the tragic secrets of Dressrosa.
End
[/SPOILER]

– Tittle “King Punch!!”
– Old lady ask Caribou to leave the town and stop figth.
– Bartolomeo defeats Hack, only 24 fighters left.
– Blue Gilly defeats Ricky. Ricky thoughts about Doflamingo when he´s knock down on the floor.
– Blue Gilly defeats Dagama, next one is Elizabello II.
– Bellamy vs Bartolomeo, Bellamy is losing.
– Blue Gilly attacks Elizabello II with “Shooting Moon”, but Elizabello II uses King Punch before.
– He defeats all fighters except one of them, Bartolomeo.
– He has protected with “Barrier”. Bartolomeo´s Akuma no Mi is Bari Bari no Mi (from barrier, baria in katakana).
– Then he attacks Elizabello II with “Barrier Crash”.
– Bartolomeo wins B Block.
– Toy soldier Kaminari talks with Franky in Coliseum corridors. Kaminari wants come to light Dressrosa tragedy. [/SPOILER] 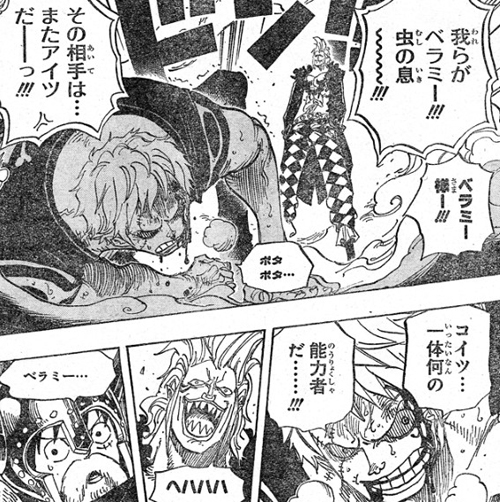