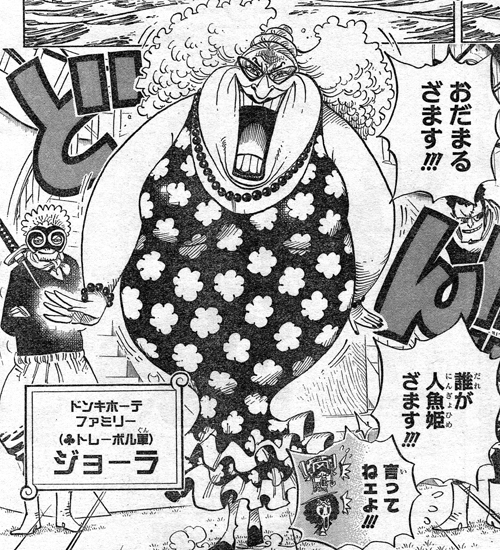 Caribou runs to the docks, only to see his abandoned comrades come to rescue him in a ship.

Jora of the Trebol army arrived at the Sunny ship, turning Nami and others into modern art.
She demands they hand over Momonosuke.
Nami, Brook, and Chopper tries to distract her from Sunny, worried she will wreck the ship useless with her ability to turn anything into modern art. She doesn’t fall for their trickery, and go ahead and turns the entire Sunny into useless art.
Kidnapping of Momo and taking over the Sunny was her mission, and she’s already accomplished one of the two.
Now the Strawhats have no means to get out of the island…!

Meanwhile in colloseum, Ricky is refusing to be treated.
He is infuriated that they made the gladiators kill each other, and now they want to treat them?
The medic soldier asks him to take the mask off as his bleeding from the head isn’t stopping, but Ricky shrugs him off and warns them not to touch the mask. Rebecca sees how seriously injured he is, and tells him he should get treated. He shrugs her off and leave, but in his mind, he is thinking of when Rebecca was still a little girl… and tells her he’s sorry, in his mind.
Likely a parent or a like-wise guardian…

Bellamy is reporting to Diamante about Luffy entering the tournament.
Diamante gives Bellamy an order to kill Luffy, and by accomplishing this he will be welcomed into the Family as an officer.
Bellamy looks extremely reluctant, thinking about how Luffy was cheering him on…

Barto approaches Cavendish, inquiring him about going after Lucy.
He says he won’t let Caven take his life.
Caven assumes Barto is also after him, and wants to do it himself.
But Barto replies his situation is much deeply rooted than Caven.

Meanwhile in C block…
The Giant Hajrudin is wrecking shit up. He’s known as the most powerful Pirate Mercenary,
and his goal is to obtain the Mera Mera fruit and become the king of all giants.
Meanwhile, the wild bull is trampling fodders around. The mighty beast is already tamed by Lucy (lol) and he’s riding on it.
Lucy is so hilarious, the crowd is already cheering him on. Rebecca smiles on, while Caven dislikes his attention.
Luffy names the bull “Ucy” (Ushi = cow in Japanese

Ucy runs into Hajrudin, which the giant took as a challenge.
He pounds on Lucy and Ucy, pummeling them into the ground.
While the crowd assume Lucy is dead, he, of course, gets up like nothing, and leaps to the giant’s head in a flash.
Lucy OHKO the giant with just a punch, not even using any gomu gomu ability, to the crowd’s amazement.